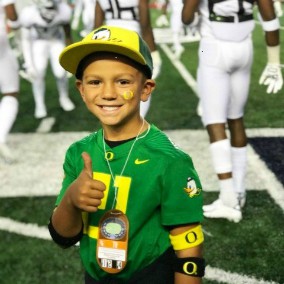 When our community needs us, San Diegans are known for gathering together in support. When six-year-old Carter Santos was diagnosed with leukemia, “#CarterStrong” became a rallying cry around schools, colleges, churches, even professional sports teams and celebrities. It’s been used in huddles before kickoffs. It’s been said among teammates in dugouts before the first pitch. It’s been used when it’s time to show strength.

His story has emphasized the kindness and generosity that is a cornerstone of shared community values across San Diego, and the impact one boy can have on thousands. 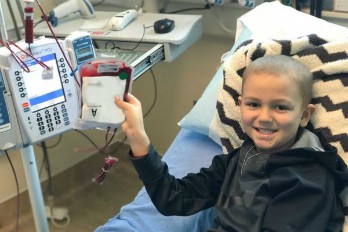 Carter’s journey fighting leukemia has been a winding one.

Before his diagnosis, Carter was always really active. So one of the first signs that something was wrong happened last year when he went golfing with his dad and wanted to go home after just three holes because he was tired. “That was very out of character for him,” his mom, Nicole, said.

Carter had a fever. His pediatrician told Nicole his blood levels were concerning, and he needed to go to Rady Children’s Hospital — he could either have a blood infection, or it could be cancer. At the hospital, they found out it was the latter, the unthinkable — Carter was diagnosed with leukemia, a cancer of the blood. He stayed in the hospital for more than 20 days.

They learned he would have to stop attending kindergarten and stop playing sports during the most intense rounds of chemo.

Over the next 36 hours, he had a port implanted in his chest and received a blood transfusion, three platelet transfusions and had a bone marrow aspiration. His family found out he had B-Cell Acute Lymphoblastic Leukemia — giving them hope for a favorable outcome, since this has a 95 percent survival rate.

On New Years Eve, Carter was sent home, but only five days later, he was readmitted due to abdominal pain and complications from his first round of chemo. The chemo caused thinning of his intestinal walls which led to perforations and sepsis. They removed 20 percent of his intestines, and Carter was given an ileostomy bag.

After six months of treatment, lots of ups and downs and an overwhelming amount of new information, Carter was declared cancer-free on June 11. He completed his intense therapy October 11. “There are so many elevens,” Carter said. “First I was 11 pounds 4 ounces when I was a baby, second I was diagnosed December 11, then June 11, then October 11.” The number has had significant meaning in their journey; it keeps showing itself. And the same can be said of their community.

“We’ve said that in this horrible diagnosis, one of the most beautiful parts of it is the community and the love that has been shown towards our family and towards Carter,” Nicole said. Support flooded in from around San Diego, from local blood drives at schools and colleges, to encouragement from Carter’s heroes who reached out in support, prayer and to inspire him to stay strong.

They have kept fighting and staying positive throughout this journey because of their faith, family, and friends.

As a Catholic family, the Santos’ made a special connection with Father John, a priest at St. Charles Borromeo. He came to the hospital and gave Carter his first holy communion. “It was really special for him to be able to receive that blessing. That’s just another example of people coming forward to wrap their arms around our family and try to help in whatever way they can,” Nicole said.

In addition to the comfort and peace that comes with prayer, Nicole said Carter himself has been an inspiration and guiding light for her, her husband, and Carter’s two sisters throughout this journey.

“He’s got a pretty incredible spirit and he’s shown a determination and strength that we all feed off of because he has shown the ability to push through things that didn’t even seem possible,” she said.

An example of this was when Carter was laying his head on Nicole’s chest in the hospital, as the doctor spoke to her. Carter couldn’t quite understand what was being said, but he did understand the importance and weight of it. He started whispering.

“I asked him what he was saying, and he said, ‘I just keep telling myself to trust and believe while the doctor’s talking.’ So that’s kind of been our motto throughout all of his treatment and diagnosis and this journey — when things get hard, we remind ourselves to trust and believe.”

Carter loves sports, specifically baseball, soccer and football. Some of his favorite teams are Portugal, the Cleveland Browns, the Oregon Ducks, and the Padres. On April 16, his dream to meet San Diego’s baseball team became a reality.

“I met Manny Machado and I threw out the first pitch,” Carter proudly shared. “Manny was fun. And Tatis Jr.” At the beginning of this year’s season, Machado, Carter’s favorite Padre, gave him his bat, signed his jersey and gave him a batting glove, dedicated to Carter.

Nicole, Carter, and his entire family are beyond thankful for the people who have given to their family, especially blood donors. Before this, they didn’t know how valuable of a resource human blood is — there is no replacement for it.

“It puts it in perspective, how it’s essentially a free resource to donate, but invaluable to the person receiving it,” Nicole said. “A big part of who Carter is, is he’s just a really active, physical boy … The blood has been a huge part of giving him the energy and strength to still be that active boy — a modified version, but it allows him to continue to enjoy the things he really loves to do.”

Carter said receiving blood makes him feel better. Since this journey began, he has had 18 blood transfusions and seven platelet transfusions, and he’s been under anesthesia 18 times. He will continue to receive blood throughout the course of his treatment to help him continue fighting.

This month, he will undergo ostomy reversal surgery. Then he’ll enter maintenance, with a much lower dose of chemo than what he was getting before. He will have a daily oral chemo, port access chemo once a month and five days of steroids a month. He will also get intrathecal administration on a quarterly basis, or chemo injections into the spine to protect the spinal fluid. This will continue until April of 2022, when he will complete his treatment.

“It’s a really long journey, and this affects the whole family,” Nicole said. “His sisters have been through a lot and they had a lot of fear for a long time until he was finally considered in remission. They’ve witnessed him really be at the bottom — he had a big change in his demeanor and physical strength; he could barely walk. I think that was really hard for them to watch. But the other side of that is they are just the most incredible sisters to him and really have shown him loyalty and love — and that’s a beautiful thing. As a family, part of this will make us all stronger.”