Joe McDonald has donated 93 gallons of blood to-date, but that’s only one of many things that makes Joe special. Joe is also a Vietnam veteran, a father, a grandfather, and at times — Santa Claus. 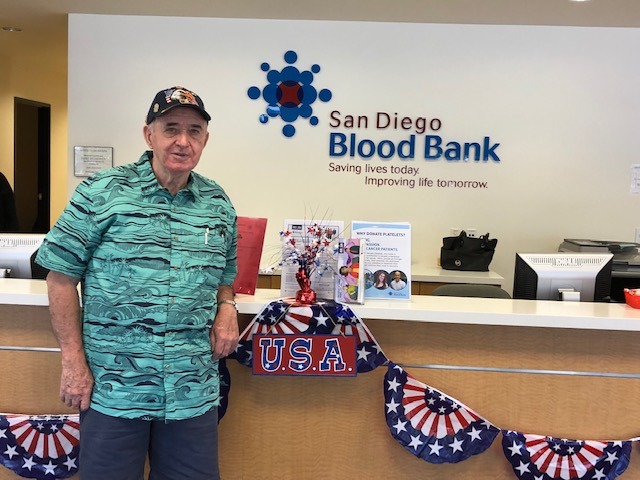 Joe joined the Marines at age 18. In 1963, aboard the USS Springfield, he donated blood for the first time for a fellow Marine who needed 84 pints of blood after an on-board accident. He’s been donating blood ever since.

Joe has traveled the world, visiting 35 countries over the years — his favorite being the Philippines where he met his wife who was an aircraft technician. He shook hands with JFK two days before he was elected president in Jersey City. He was in Washington to witness Martin Luther King’s famous “I have a dream” speech. Joe coordinated the first bicentennial parade in San Diego as a member of the Junior Chamber of commerce, and he was active in Toastmasters. After he was honorably discharged as a Sergeant in the Marine Corps, Joe worked as a logistics Manager at North Island, retiring in 2002. Joe now lives in Escondido. He has 2 sons and 5 grandchildren.

“I have donated since 1963 in USMC. My goal is 100 gallons. I will reach this goal in less than 3 years. The workers at the North County Donor Center are like my family. They have helped me in good and bad times. When I walk in the door everyone greets me like family. Plus, it’s like getting a mini-physical every time I donate."

He brings cakes to SDBB’s North County donor center many times a year for holidays and Virgo birthdays. He also comes dressed as Santa to greet donors over the holidays.

Joe has been playing Santa for some 50 years, starting when he was in the Marine Corps delivering toys to an orphanage in Vietnam. He enjoyed it so much that he continued to play Santa for various charities as the years went on. Joe will be back in his Santa suit visiting with donors next month at SDBB’s Gateway Donor Center.

We asked Joe what he would say to others to inspire them to donate blood. “You’re saving lives every time you do it. When I hit 100 gallons, it will be like saving 2,400 people’s lives."

We’re happy to highlight Joe during this Veteran’s Day holiday. He’s a veteran, a father, a grandfather, Santa Claus, and — a lifesaver.