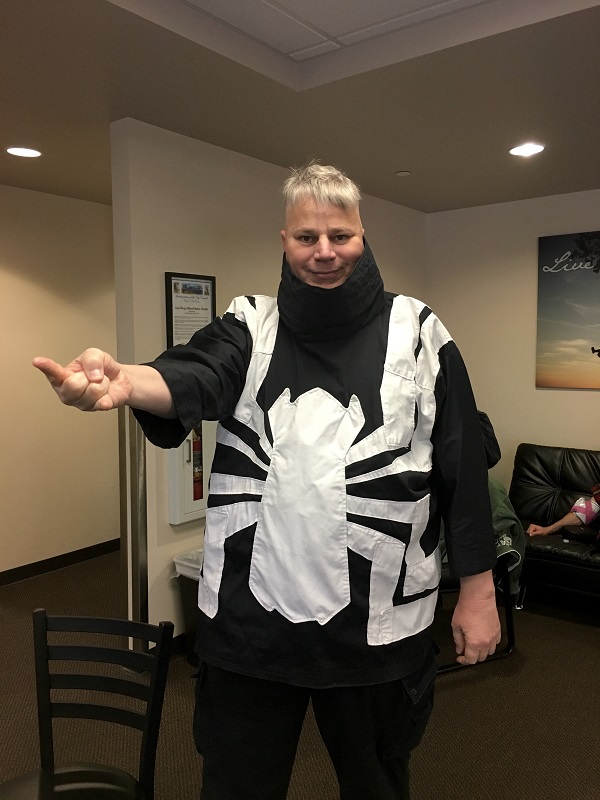 A space suit, a Japanese kimono, and this Venom costume — these are just a few of the costumes David Keenan has made or is in the process of making by hand for his love of costume roleplay, also known as cosplay. He regularly participates in costuming at health and charity events, and every two to three weeks, he stops by the San Diego Blood Bank to donate platelets.

David is a regular platelet donor. The more intricate process takes a total of around two hours, but for him, it’s worth the time.

“I donate platelets because I know I can do it,” he said. “I like being a part of a community.”

Aside from being a blood donor and cosplayer, David is also a member of the Star Wars society, a local fan group of the series. But it was cosplay that had the biggest impact on his life. The unique and popular hobby taken up by lovers of anime, movies, and video-games across the nation is one that deeply affected David.

“Cosplay is very inclusive,” he said. “I have Asperger's Syndrome, and it really helped with that. The acceptance and inclusion makes it great for everyone.”

On Saturday, January 25, David came in to the Blood Bank with his recently made costume representative of Venom, a character from Marvel comics commonly associated with Spider Man. By participating in both cosplay and blood donation, David is a superhero in all he does — especially to the Blood Bank and many patients needing blood and platelets.