Want to donate blood but you're afraid? Here's some inspiration... 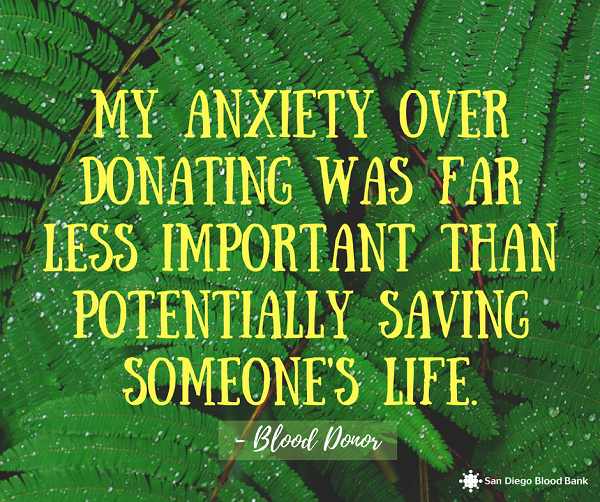 Anxious is a common word individuals use with when describing how they feel about donating blood. We at the San Diego Blood Bank understand why would-be (or current donors) may feel that way. Needles can be scary! The sight of blood can be intimidating.

Rewarding, on the other hand, is another word our blood donors use to describe how they feel after they donate blood. Needles don’t have to be scary. Knowing you took the time to donate blood can make you feel proud and accomplished.

Our emotions change constantly. Ideally, we’d have more positive ones. Since blood donations are always needed, we thought we’d share an inspiring story from a donor herself. This story brought us feelings of compassion and kindness. Read on to see what we mean and how our feelings of anxiousness can turn into a reward instead:

"I started attending Comic-Con in 2012, and I had some free time because I only had a badge for 2 out of the 4 days. I saw the blood bank booth and became interested, but I chickened out because I hate needles and can't really stand the site of blood. I also chickened out the next 2 years, but in 2015, I decided that would be my year! And I'm so glad I did! I didn't get any badges that year and decided to check out all of the non-badge things that I could do, and donating blood was one of them.

Once the needle was in--and the staff had made me as comfortable as they could--I saw a young mother walking to all of the stations with a little girl in her arms and a slightly older little girl walking beside her. I remember that the older girl had the cutest little Darth Vader dress, and the younger one was dressed as R2-D2. They were going to each donation station, thanking those who donated because they were regular recipients. It just about broke my heart to see how brave they both were.

So, because of those 2 little girls, I decided to donate every year that I came to Comic-Con, no matter how scared I might be. Three years and counting..."

Kamila and Ella at Comic-Con 2015.png

Know someone who can use encouragement if they’re afraid to donate blood? Share this story with them.

If you have a good story yourself, let us know. Tell us why you donate blood by emailing outreach@sandiegobloodbank.org.